More than a quarter of the people living in Japan are over the age of 65, making it the world's oldest population. With this in mind, the rest of the world can learn something from how Japan cares for the well-being of its elderly and aging population.

About Elderly People in Japan

In Japan, the elderly are generally treated with the utmost respect. Many Japanese families have several generations living under one roof. This factor is believed to be one of the many reasons that in Japan, elderly people live longer than any other population. In fact, there are more elderly citizens than young people in Japan. The population is comprised of more people over the age of 65 than any other age group.

The reason for the high population of senior citizens in Japan is that many Japanese live to be well over 100 years old. Some reasons attributed to the longevity include:

An Aging Secret in Okinawa

One group of Japanese who have long life spans is those who live in Okinawa. The Okinawans believe one mixture they drink can cause them to live longer. The drink is a mix of honey, garlic, aloe vera, and turmeric along with a native liquor. They drink this mixture before going to bed each night. In addition, the diet of those in Okinawa is mostly vegetarian, made up of lots of vegetables and soy protein, which are both low in calories and fat. This healthy diet helps Japanese citizens maintain a healthy weight, not to mention low cholesterol and blood pressure. 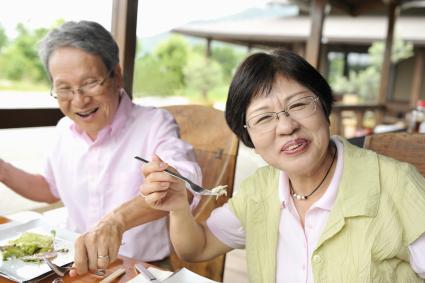 Beyond Okinawa, most Japanese residents eat smaller portions of food with lower calories than average around the globe and also eat slower and more mindfully. The slower pace of eating not only aids digestion but also allows their brains the time necessary to signal that they're full before extra calories are consumed.

The Japanese also believe in working as long as they can. Many work until they are in their 80s and some even work until they reach 90 and beyond. A strong work ethic and a busy social life may contribute to their long lifespan. Remaining active has been proven to be a positive factor for the elderly. Those who are elderly in Japan try to make the most out of their daily life and fill their days with enriching activities.

Of course, as with any group, there are concerns for senior citizens in Japan. Living longer means more potential difficulties regarding finances and retirement. This is most likely one reason the Japanese still work when they are elderly. Saving enough money to keep you secure until you reach 100 and beyond can be quite stressful, not to mention that it requires extensive planning and saving.

Japan has offered universal health coverage to its population since 1961, but in 2000 Japan added long-term care falling under the umbrella of welfare services. In response to an aging society, Japan is preparing to install a "Community-Based Integrated Care System" by the year 2025. This care system will include four aspects that are specifically designed to support an aged population:

Japan wants to ensure that the elderly citizens are cared for throughout their golden years right up to end-of-life. The four-tier policy is designed to make governmental support only a portion of the complete picture, taking the bulk of the financial obligation off the Japanese government. Though not a perfect system, Japan is ahead of many other governments by actually putting a system in place to care for their rapidly-aging and aged society.

Learn from the Elderly in Japan

If you are interested in living as long as possible in order to get the most out of your retirement years, consider the following tips.

Plan for Your Retirement Wisely

Know what to expect when planning to live on a set income. Budget your finances properly so you will not be surprised when retirement nears. Always keep an eye on your retirement plan and use a trustworthy financial planner to guide you in the right direction.

Many seniors prefer to live in a retirement community so they can be among people their own age as well as have a range of activities in their reach to choose from. Many communities take care of yard work so that seniors don't have to worry about it on their own. If you want to live in a community, be sure to do your research beforehand so you can find the one that fits your budget and needs.

Try to stay as healthy as possible. Be aware of your diet and nutrition and stay active. Surround yourself with friends and family and take time to relax and enjoy your golden years. The elderly people in Japan believe in relaxation and meditation as a means of finding inner peace that they feel can make them live long and prosper.

An all-around approach to well-being, which includes physical, mental, and financial wellness, can help ensure that your retirement years are not only happy and healthy but stretch on for as long as possible.