Telling jokes for seniors is sure to get a laugh if the joke is funny enough and reaches the right audience. Humor and quips about aging have long tickled people's funny bones because the experience of aging is universal.

Jokes for Seniors Are Everywhere

There are good resources and hundreds of jokes you can choose from. Many jokes are also printed on greeting cards and shared among friends, or posted as cartoons. Others are developed in the process of aging and laughing about it. In fact, jokes about seniors are probably the most popular type of jokes out there. With so many humorous anecdotes to choose from, find some of your own. Good jokes for the elderly are universal, meaning anyone can understand and relate to them. A good, simple, and clean over the hill joke always elicits a laugh.

A young girl watched her grandmother move several duck figurines from the bottom shelf to the middle shelf of a cabinet. The grandmother picked up one of the ducks and then set it down on the middle shelf. She picked up another duck figurine from the bottom shelf and set it beside the first duck. She continued moving the ducks from one shelf to the next.

Finally, she stood back and looked at the cabinet.

"Hmm..." She moved back to the cabinet and began moving the ducks onto the top shelf.

"Grandma," the little girl finally spoke, "what are you doing?"

"I'm just trying to get my ducks in a row," the grandmother answered. -Sally Painter

"When you're a baby, you're taken care of by your parents.

When parents grow old, they're taken care of by their baby." -Sally Painter

The elderly man was an eyewitness to the car shop crime scene. When the police asked him to tell them what happened, he told them what he'd seen.

"The guy with the beer belly grabbed a wrench from the toolbox!"

"What happened next?" the detective asked.

"Oh man, it was a gut-wrenching moment." -Sally Painter 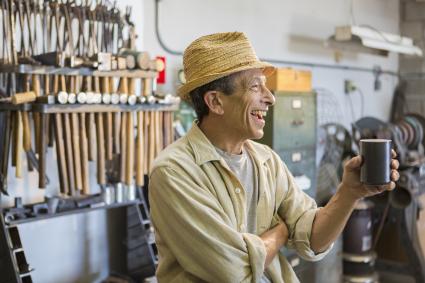 The elderly grandma always talked to the hens whenever she fed them.

One day, her grandson asked, "Grandma, why do you talk to the chickens?"

"I'm just trying to egg them on." -Sally Painter

"Love, Texas is a small but lively town,

Alyce Hills enjoys a morning stop on her way to work for coffee at the Love Café.

Everyone in town knows her as the head of Hills Temporary Agency, but locals simply refer to the agency as Hills.

That makes Alyce the head over Hills in Love." -Sally Painter

The elderly congregation was perplexed when the preacher pulled out a pocket watch and threw it to the end of the room. It slammed into wall and fell to floor in pieces, but the watch kept ticking.

"What does this demonstration tell you about life?" The preacher challenged the congregation.

A man in the back slowly stood up, leaning on his cane. He stared down at the ticking clock.

"Well, preacher, I suspect this watch shows that time flies and stops for no one." -Sally Painter

Judge Ferris slammed the gavel down trying to bring order in the courtroom.

Staring over the rims of her glasses, the judge frowned at the elderly man, Alan T. Book.

"About what, your honor?"

"How you managed to conceal your crime for sixty years?"

"Well judge, it's quite simple. No one suspected me. I didn't look like anyone who'd do such a thing. After all, you can't judge a Book by its cover!"-Sally Painter 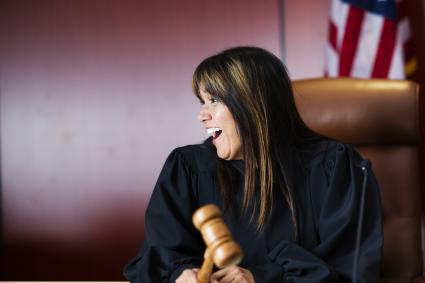 The old exorcist priest frowned at his apprentice.

"Are you sure this is Holy Water?" he asked as they were packing for the exorcism.

"Oh yes, Father, I made it myself," the younger priest said.

"How did you make it holy?" the elderly priest asked, curious if his trainee had followed the proper procedure.

Nelson Love sat at the diner counter and watched the waitress refill his coffee cup. The waitress unscrewed the lid on the saltshaker and the maple syrup dispenser. She turned from the counter to get the salt container and syrup container to refill them when Love reached for the saltshaker.

She stood there watching in disbelief when he poured the salt into his cup of coffee. Love stirred the coffee with a spoon and then reached for the maple syrup dispenser grabbing it by the handle.

Before the waitress could stop him, Love had poured it into the coffee cup.

"What on earth?" One of the wait staff whispered beside her. "Did Nelson Love just put salt and pancake syrup in his coffee?"

" 'Cause Love is blind." - Sally Painter

10. Cellphone at the Driver's License Bureau

Fred found himself in a long line at the driver's license bureau and moved to stand in the shorter line. He turned around to see an elderly woman just standing in between the two lines and not moving to get in either one. He watched as she pulled out her cellphone and began reading the news. He was confused why she was just standing there reading between the lines. -Sally Painter

An elderly couple is worried that they are starting to forget simple things, so they go to a doctor for a checkup.

The doctor looks them over top to bottom but doesn't find anything.
"It seems you two are perfectly fine so all that I can suggest is anytime you want to remember something, simply write it down".

The couple believe that's a great idea and so they go home with renewed confidence.

Later that evening, the couple are watching television and he decides to grab a drink.

"Need anything my dear" he asks?

"Could you grab me some ice cream. Here write it down" she tells him.

"No need my dear, ice cream coming up"!

"Oh, and some chocolate sauce please. Want to write it down"?

"Ice cream with chocolate sauce, got it".

"And a cherry dear" she asks "sure you don't want to write it down"?

"Ice cream with chocolate sauce and a cherry. I've got it, Hun".

The elderly man is gone for 10 minutes and the woman begins to worry. He comes back with scrambled eggs, bacon and orange juice. The woman looks at the food and says

An old man was telling a group of friends how when he was young, his older brother was lowered into a well by standing on the bucket.

"And what happened?" one of the listeners asked when the man paused.

The old man stroked his beard, and spoke softly, in a tone of sorrowing reminiscence.

Two old farmers are walking down a road when they hear a motorcycle behind them but are shocked when the driver passes them and the biker is headless. The two men look at each other and shrug. They continue down the road and a bicyclist comes up behind them and he, too, is headless.

The two old men continue to walk down the road, when the one walking along the inside turns to the other one.

"You know, Allen, I think maybe you should carry that scythe on your other shoulder." -WhattheDaily

A man was dining with an elderly couple was very impressed by the man's terms of endearment to his wife. He said things like, "Thank you, my sweet," "Please, my dear," or "Okay, my beloved."

When the wife went to the kitchen to get dessert, the man turned to his friend. "George, after all these years, it's very touching that you speak so lovingly to your wife.

The old man sighed and shook his head slowly, "It's not that Peter. I'm embarrassed to admit it, but I forgot her name years ago." - MAAW (version of #34)

"One night a state cop saw a car going only 22 miles per hour. He pulled the car over. When he approached the driver's side, he noticed five old ladies were seated in the car and all them looked to be in shock. They were all very pale.

The old lady driver greeted him, "Officer, Whey did you pull me over? I was going the speed limit exactly. What is the issue?"

"Ma'am you weren't going over the speed limit, however driving under the limit is just as dangerous."

"Before I let you go, is everyone ok? The other ladies seem a bit unsettled."

"Oh, they'll be fine in a minute. We were just on route 119." -Caregiver Connection

A few tips can help you get the most mileage out of your joke telling. When you enjoy telling the jokes, your enthusiasm becomes contagious.

Just like with any good story, it's helpful to keep your audience mesmerized. Build tension in the joke, just as you would a good story, and keep listeners on the edge of their seats. Substitute your own experiences that may be similar to those in the joke. Change insignificant details so the joke has a more personalized feel.

Use hand gestures and don't speak in a monotone voice. Instead, emphasize certain words and parts of the joke by speaking louder at certain times and softer at others. It's especially important to remember to speak loud enough when telling jokes to the elderly.

If the joke is bound to offend an elderly person, keep it to yourself. In the same sense, a senior who has recently lost a loved one would probably not appreciate a joke about funerals. While it might make you chuckle, other people might not be able to see past their struggles to the humor. Try to be sure your audience will have a good response to your joke.

Telling Hilarious Jokes for the Elderly

Everyone enjoys a good laugh, especially older people who have an abundance of life experiences and can relate to the irony and humor. The right joke or even a funny poem can provide everyone with a moment of fun and carefree joy.